Over the decades, Land Rovers have proven to be an ideal platform for specialist conversions. This page lists a selection of these conversions. Due to their specialist nature, most were only manufactured in small quantities or never left the prototype stage. 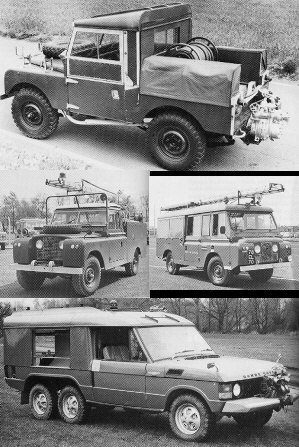 Land Rovers and Range Rovers were particularly popular choices for fire engine and ambulance conversions. The Land Rover was a good base for an off-road appliance, whilst the Range Rover offered speed and size for airfield operations.

Initially Land Rover sold its own fire appliance based upon the Series I 80", but realised that it was not well equipped to produce a good range of fire appliances. Therefore a number of specialist manufacturers were licensed to produce fire appliance and ambulance conversions. Of these manufacturers, Carmichael & Sons are of particular note, and are famous for their 4x4 and 6x6 Range Rover conversions. These proved particularly popular as airfield emergency vehicles.

Land Rovers were a popular base for work platforms ('cherry pickers'), and a number of versions were built. 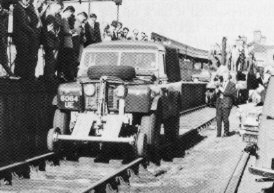 Another conversion that was tried on a number of occasions, was the rail conversion. One of the first "Rail Rovers" used flanged railway wheels in-place of the road wheels. This was intended for inspection and light shunting. Trials showed that shunting was in-practical due to the size of the rolling stock compared to the Land Rover. The flanged wheels had a rubber composite tyre that tended to develop flats, resulting in an uncomfortable ride. Hence, this project was dropped.

More successful, were the combined road/rail conversions (see picture). These vehicles demonstrated quick acceleration when compared to small conventional locomotives. Intended to move personnel and small equipment, the main problem was that the Land Rover was often too small to trip the train detection circuitry. Hence these kinds of conversions saw limited use in the UK. 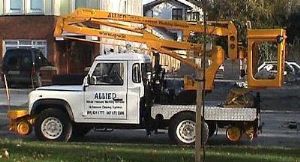 In recent years, rail-capable Land Rovers have re-appeared. The picture to the right is of a modern Land Rover Defender fitted with a 40ft hoist lift and equipment for road/rail running. The road/rail conversion was performed by Harsco Track Technologies Ltd for Allied Pressure Washing Services in Ireland.

Thank you to Jon Lyng at Allied Pressure Washing Services (Ireland) for the photograph. 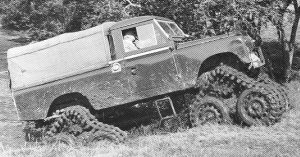 This strange looking vehicle was converted by Cuthbertson & Sons in Scotland, and was built to go further in adverse off-road conditions than the conventional Land Rover. The main advantage of this conversion was that it greatly reduced the ground pressure, making it ideal for marshy and wet ground. The main problem was that it was poor at climbing 'steps' (ie. banks). The tracks would tend to spin if the Rover hit a steep bank whilst traversing marshy land. The height was both an advantage and a disadvantage. Ground clearance was increased, but stability was reduced.

Even weirder was this experimental 'Hover Rover'. This was a Vickers conversion, developed in parallel with the first big hovercrafts. Technically a 'cushion craft', the Hover Rover was developed to minimise ground pressures. The main problem was that it required two engines, reducing the payload capacity. Although the hover cushion supported much of this extra weight, it was still a problem for conventional road operation.

The primary application that was trialled was that of crop sprayer. Unfortunately the air from the cushion scattered the spray uncontrollably. The Hover Rover was never developed any further, although for a few years Vickers used it as a promotion device for their larger hovercrafts.

The Series II 109" and Series III 109" vehicles were particularly popular with Governmental and Non-Governmental Organisations for use in Africa. Vehicles could tour around remote villages, providing services that would only normally be found in cities. Such services were typically medical in nature, although a popular service was that of Mobile Cinema. This was ideal for use by government education departments, and also included public address and recording facilities.