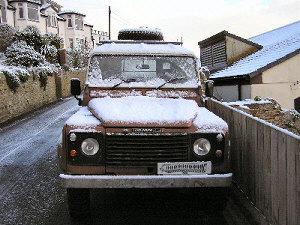 Externally, the 110 ("one-ten") resembled the Series 3. The general shape was retained, but there were a number of minor changes. The grille was moved forward, allowing sufficient space in the engine compartment for the Rover V8 as well as other engines. The windscreen was replaced with a taller one-piece windscreen, and polyurethane wheel arches were fitted. Inside, the furnishings were improved, and the slide windows were replaced with wind-up ones. The rear load space was increased by restricting the boxed-in sections to the wheel arches only. 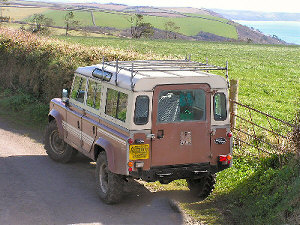 With the 1990 model year the ninety and one-ten were re-branded 'Defender'. Defender also came with the 200TDi turbo diesel engine option, followed in 1993 by the 300TDi. In 1999, the TD5 5-cylinder turbo diesel engine option was added to the line-up. Despite the introduction of electronics with the TD5 engine, it quickly proved itself as tough as any Land Rover engine. 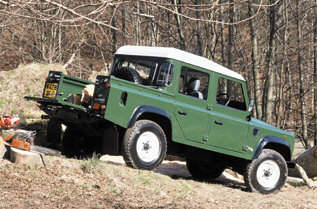 In later years, a double cab version of the 110 pickup model was released. Keeping the proven working vehicle of the original pickup, the extended cab can seat six people.

Production of the Land Rover Defender ceased in 2016 - 67 years after the first Series 1.

1984 110 County Station Wagon (brown) Photographs: © Mark Varley.
Thanks also to Mark for some of the above information.