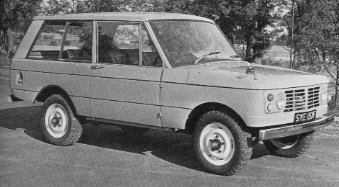 Ever since the introduction of the first Land Rover there was pressure within the Rover Company to 'tart up' the Land Rover to produce a more stylish and comfortable vehicle. Keeping the Land Rover itself as a strictly utilitarian vehicle proved successful, and demand continued to outstrip supply. There were a number of research projects for a luxury Land Rover, but the only one to develop into a prototype was the Road Rover of 1958. Due to limited development funds, this vehicle was forced to use the P4 chassis, and resembled the P5 saloon car of the period. Off-road abilities were limited, and the project died a natural death.

By the mid-1960s, various factors came together to make a luxury Land Rover a viable project. Military orders had been cut back, and market research showed a growing leisure market that required a passenger carrying vehicle. By early 1966, development began on an 'Interim Station Wagon' as a stop-gap to cover the falling military sales. The project quickly adopted the V8 3.5 litre engine which Rover had recently purchased from the US and was already being fitted to P5 and P6 cars. By late 1966, the project had grown into a five seat station wagon with P6 standards of comfort, on a 100in chassis that allowed unprecedented wheel travel. 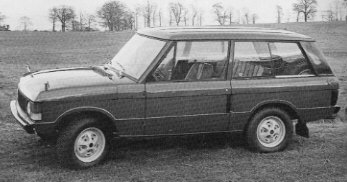 The standard Land Rover gearbox was not strong enough for the V8, and a new gearbox was designed. This retained a high-low gearbox, but 4x4 capability was provided by a lockable central differential. This contrasts with the dog-clutch mechanism used on the Land Rover gearbox. Long travel vertical coil spring suspension was fitted instead of the Land Rover leaf springs. Prototype No. 1 was completed by July 1967, retaining Land Rover drum brakes and transmission. This showed problems with axle location, and the transmission was modified. Disc brakes and a Boge Hydromat levelling device was also added to the design. Prototype No. 2 was built to test these modifications.

The last thing required was the body styling. A 2-door body was chosen to reduce costs, although the resulting seat and seat belt arrangement significantly reduced these savings. Spen King and Gordon Bashford designed the body and interior, creating their own mock-up. All of these features were combined in the first 'production specification' prototype, Prototype No. 3. This was quickly followed by prototypes 4 through 6, for testing and filming. One final engineering prototype 100-7 was built to find production build problems in the Pilot Build Shop.

Production began in 1969 with 25 pre-production vehicles finished without rear seats and with minimal trim. These were followed by a batch of twenty which were ready for the Press Launch in June 1970. Initial production was slow as teething problems were solved, but increased to 100 per week in 1972, and 250 per week in 1975. 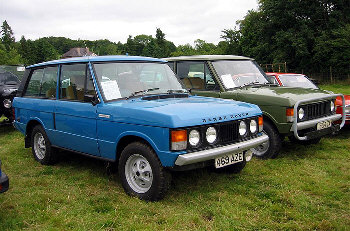 Launch was a success, and public demand outstripped all expectations. As well as finding demand from land-owners, horse-racers,etc a top speed of almost 100mph found quick favour with the Police. Also, the car-like abilities combined with a high driving position and strong towing ability, found a completely new market with families.

Over the next two decades, the Range Rover would be continuously refined. The most striking modification was the 4-door model which was introduced in 1972 and quickly out-sold the original 2-door model. Other refinements included a viscous locking centre differential, the world's first off-road ABS system, electronic traction control, and an electronically controlled air-adjustable suspension. This air suspension was another first for Range Rover, and replaced the coil suspension at a time when competing vehicles were finally adopting coils.

Production continued for just over twenty five years, finally ending in 1996 a couple of years after the P38 Range Rover was launched. Even today, it is preferred by many in the off-road fraternity as their off-road vehicle of choice. The Range Rover was a unique vehicle. As well as excellent off-road abilities, it is the only vehicle to have been exhibited in the Louvre as a work of art.