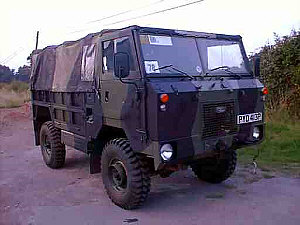 Announced at the 1972 Commercial Motor Show, the 101" Forward Control was designed specifically for military use. The primary requirement was to meet the British Army's need for a vehicle capable of towing loads of up to 4,000 lb. Designed for power and durability, the 101" was officially rated at 1 tonne. The power requirements were met by using the Rover V8, LT95 gearbox, and matching transfer case; which were already being used in the recently introduced Range Rover. These were mated with sturdy Salisbury axles for both the front and back. Existing brakes from the 1 ton Series III 109" were fitted, but new half-elliptic leaf springs were used for the suspension. To reduce weight, the cab was positioned over the engine to produce a 'Forward Control' layout. Unlike the ill-fated IIA & IIB Forward Controls, a specially designed chassis was used. As with the 1/2 ton Lightweight, most of the body panels were detachable to allow further weight reductions for air transportation. Progress in helicopter technology meant that it was now viable to air-lift the heavier 101".

The 101" was also designed with a matching 1.5 ton powered trailer, effectively making it a 6x6 vehicle. Un-powered trailers tend to act as dead weight in an off-road environment, causing Land Rover to experiment with the powered trailer concept in the 1950s and 1960s. Although the original experiments were a mixed success, a clever transfer case design allowed the trailer axle speed to be synchronised with the main vehicle. An ingenious coupling system also allowed the trailer to rotate 360° relative to the vehicle. The main weakness of the concept was that the trailer could force the vehicle to jack-knife on tight downhill corners. Also, the Ministry of Defence realised that the trailer was particularly expensive considering that it could only be used with one vehicle type. These two factors resulted in Land Rover eventually abandoning the powered trailer concept.

The 101" finally entered service with the British Army in 1975. Driver comfort was minimal in the strictly utilitarian 101", and the vehicle was considered too basic to offer to the civilian market. Although successful with the British and Australian Armies, it failed to attract any other large orders and production ceased in 1978.

As well as the standard soft top 'general service' (GS) vehicle, a number of other bodies were fitted including 24-volt radio wagon (FFR), and ambulance bodies.

A combination of an active refurbishment programme and the British Army keeping many 101s in storage, resulted in many vehicles surviving in service well into the 1990s. The last 101s were withdrawn in the late 1990s. These vehicles served as ambulances in Kosovo and with the Territorial Army.