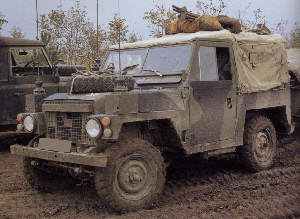 The Lightweight 1/2 ton Land Rover, also known as the 'Airportable', grew out of a British Army need to have a light-weight fighting vehicle that could be transported by air to exactly where it was needed on the front line. Parachute platforms had been tried on a number of occasions with little success. With the advent of the Westland Wessex helicopter in the 1960s, it became viable to air-lift vehicles that were under 2,500lb in weight.

The Series 2A 88" was too heavy to meet this specification, but Land Rover were successful at stripping it down to produce the Series IIA Lightweight. Virtually everything that was considered non-essential was removed or reduced in size. The bumper and spare tyre were removed. The upper body, doors, and windscreen were replaced with flat panel body items that could be easily removed. The width of the vehicle was also reduced. This helped to reduce the weight, but it also allowed the new vehicle to fit on a standard NATO pallet. The civilian running gear was kept, although the axles were substituted with short axles to fit the new width.

The final Lightweight IIA weighed 2,650 lb, but can be reduced to 2,500 lb by removing the body panels. With improving helicopter payload capacities, this proved acceptable to the MOD (Ministry of Defence). 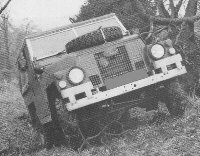 Production started in 1968. In 1973, the Series IIA Lightweight was replaced with a Series III version that incorporated parts from the recently launched civilian Series III. As with the corresponding civilian vehicles, the primary external difference was in the position of the headlights. The IIA Lightweights had their headlights on either side of the radiator grille, whilst the III Lightweights had their headlights positioned on the wings. Production finally ceased in 1983 when the civilian Series III was being replaced by the 90 and 110. In total, over 20 countries purchased the Lightweight for their armed forces. Most were fitted with petrol engines, but some had diesels. As with most military Land Rovers, there were a number of variants including 12-volt and 24-volt electrical systems, FFRs (Fitted For Radio), hard tops, and even a 'Gunship' fitted with a 106mm anti-tank gun.

Spanish Land Rover licensee Santana, produced their own version called the 'Militar'. This was produced with 88" and 109" wheelbases, and served with the Spanish armed forces.

British Armed Forces have now sold all of their Lightweights, replacing them with 90s and the 110-derived 'Wolf'. De-mobbed Lightweights are proving to be very popular with off-road enthusiasts.