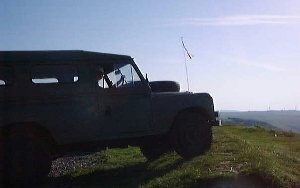 These pages cover Land Rovers - especially Series 3 military vehicles. I used to own an ex-MOD Series 3 109" Land Rover, but have had to sell it. These pages were developed during my ownership and are being kept online in-case they are of use to anyone else. Recently, a Land Rover History has been added.

When I lived in the UK, my "car" was a little unusual, in that it was an ex-MoD Series 3 109" Land Rover. The British Army took delivery in January 1973, making it a little older than myself. After being passed around the regiments and a couple of stints in Northern Ireland during the 1970s (probably as a reserve vehicle), it joined the Gurkha Rifles where it stayed until being de-mobbed in 1989. It is the 3/4 tonne FFR (Fitted For Radio) variant, although when I purchased it, the most obvious FFR features (radio seat, and tuner heads) had been removed.

My FFR (at the back), Vince's FFR (camouflage, on the left), and Ian's "Felicity". This is Vince's front garden. Vince's has since been through two other SII/SIII Land Rovers.

Land Rover Links - links and contacts on the Internet.