In the first part of this article, I argued against the use of Mercator and Equirectangular projections for web maps showing global data distributions and areas. Instead, an equal area projection is more appropriate because it preserves relative areas and data densities.

In our search for a suitable equal area projection, I have identified a number of criteria. The projection should:

Conic projections can be used to create equal area projections, but they only cover a region.

The Albers Conic projection is one of the most common equal area conic projections. Although it is limited to small countries and regions, it is included here for completeness.

The Albers projection is defined by two standard parallels. Although shape and linear scale are not perfectly preserved, their distortion between the parallels is minimized. Useful for mapping small countries and regions in the mid-latitudes, but works better for east-west areas rather than north-south areas.

The Bonne projection is a pseudo-conic projection, with parallels that are equally spaced concentric circular arcs. Direction, scale, and shape fidelity are true along the central meridian and standard parallel, but distortion increases away from these lines.

The Bonne projection is usually only used for continental maps due to distortion near the edges. It was very popular during the 19th and early 20th centuries for large atlas maps (eg. of Asia), but has since fallen out of favor. 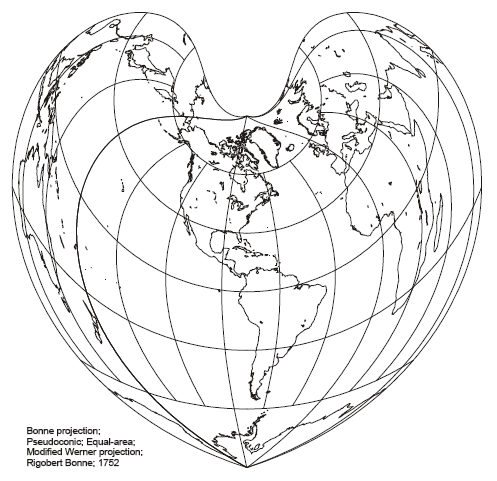 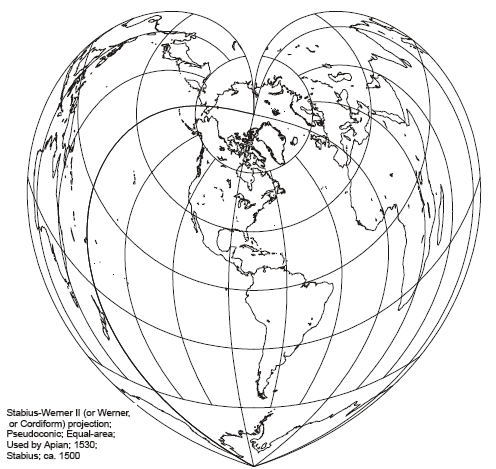 The Lambert Azimuthal Equal Area projection is limited to only one hemisphere at a time, and is included here for completeness. It is particularly useful for large roughly symmetrical areas, and is often used for the polar regions.

The Lambert Azimuthal Equal Area projection also has non-cartographic applications in structural geology, where it is used to analyse the relationships between different orientations. 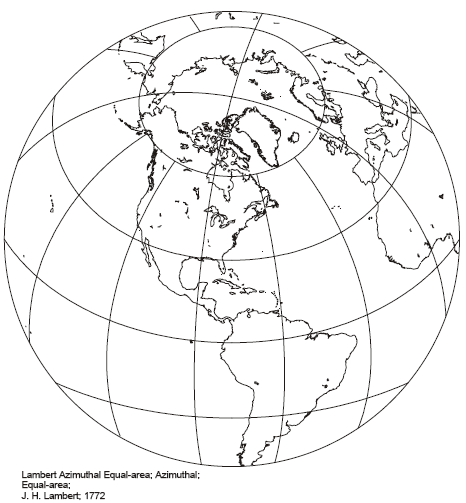 The Hammer is a global projection that is a modification of the Lambert Azimuthal Equal Area Projection. The equator is the only straight parallel. All other parallels are complex curves. Angles are only true where the equator and the central meridian intersect. 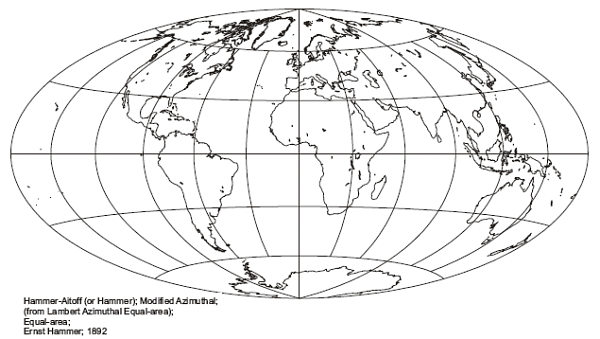 This is an equal area cylindrical projection. Standard parallels are at 30 degrees north and south.

Another equal area cylindrical projection is the notorious Gall-Peters projection.  This is an orthographic cylindrical projection with standard parallels of 45 degrees north and south. It was originally invented by Gall in 1855, but remained in obscurity until Arno Peters  (apparently independently) devised a virtually identical projection (standard parallel of 44.138) in
1967.  The Peters Projection was intended to show a more representative map of the relative area of the equatorial and third world countries compared to the first world. The few professional cartographers who commented, were very critical. Despite this, it has seen widespread use by various socially concerned agencies including the United Methodist Church, the Vatican,  the World Council of Churches, and various UN agencies. I remember it making regular appearances in British high schools during the 1980s. At a school level, it probably had “shock value” indicating the relative size of Africa to Europe. Some of the critics probably disliked the underlying politics, although it also has practical geometric problems. The Gall-Peters projection is an equal area projection, but has a lot more shape distortion than most equal area projections. As pointed out by its critics, the most visible distortion is at lower latitudes – exactly where it is meant to be most representative. 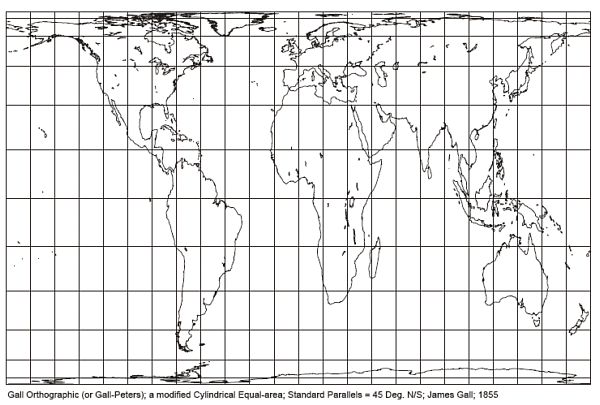 The Bonne and Werner projections are interesting looking projections, but they are probably too unfamiliar for modern map readers. They also have high levels of shape distortion at their edges.

The Gall-Peters has received a lot of publicity for solving the very problem that we are looking at. However, the equatorial shape distortion is extreme; and the Behrmann is a very similar projection but with much lower levels of distortion.

This leaves the Hammer and Behrmann projections as candidates for our global maps.

In the final part of this article, I shall look at the Pseudo-Cylindrical projections.

The Albers projection image is licensed under the Creative Commons license, and available from the Wikimedia Commons.

The remaining projection images are public domain images produced by Paul B Anderson.