Land Rover Recovery Techniques,
or don't back into ditches...sideways! 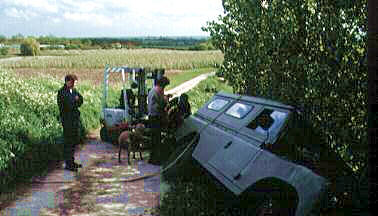 Here I am demonstrating an excellent anti-theft method of parking. The truck was firing on 3 cylinders. A bit of test driving was required after adjusting the points. That's my excuse, anyway!

Initially, she was only half in the ditch. The first attempt to tow her out with a tractor almost succeeded - the rope snapped at the critical moment! Of course, as she fell back, she fell into a much worse position (seen here).

By this point, the cavalry had arrived - a second tractor, and a forklift truck! 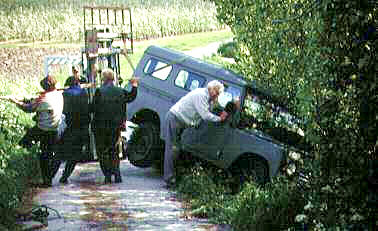 The roof was leaning against one of the trees on the far side of the ditch! The ditch was also steep-sided, so simple towing would have led to the Landy rolling.

The plan: Lift the rear out with the forklift (strapped to my nearside grab handle).

To stabilise the truck, a strop was threaded underneath, and over the top, anchored to a tractor on the far side of the track, and held tight by people.

Paul (my uncle) is wishing I had power steering. David (another uncle) is doing the honours with the forklift. 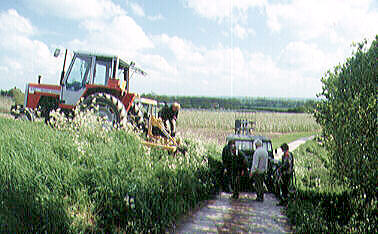 She's out! The collected equipment can be seen here in the picture, but why won't she start? Oh! Its that fuel tank changeover tap!

Total damage: The dent on the roof popped itself out. My second fuel tank (already leaking and out of action) was slightly squashed. Dents on the nearside sill and wing, were easily pushed out. Just a few souvenir scratches, and the grab-handle was slightly a-skew!