The Battle of Winwaed: Background History

Oswy was the brother of St. Oswald. Oswald was also King of Northumberland who united the kingdoms of Deira (Yorkshire and Lincolnshire) and Bernica (present-day Northumberland) into the Kingdom of Northumberland. In their youth, both Oswald and Oswy had been exiled to Iona.

Bede quotes Oswald's death as 5th August 642 AD in a battle against Penda of Mercia, possibly at present-day Oswestry. The Anglo-Saxon Chronicle prefers a location at Mirfield. Bede's account suggests that Oswald became very much a cult - with his relics spread across Europe and producing a variety of miracles.

Although much of the Anglo-Saxon world was still pagan by 655, Penda of Mercia was the only real threat to Christian domination. Penda also had a number of Welsh Lords fighting with him. It is possible that some of these Welsh Lords became the subject of some of the poems produced by the Welsh Bards.

The literature review given by Breeze ("The Battle of the Uinued and the River Went, Yorkshire" in in Northern History vol. 41, issue 2; see also my Location of the Battle of Winwaed page), describes Penda forcing a major defeat against Oswy at Stirling. Oswy is forced to hand over large quantities of treasure. Oswy pursues Penda as he returns to Mercia, forcing a battle at an inopportune time and location for Penda. These factors count against Penda at the Battle of winwaed and Oswy's smaller army is able to score a major victory. 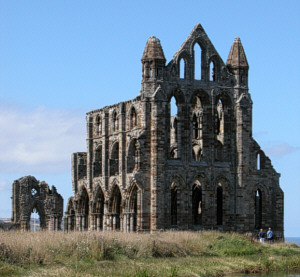 The battle was not fought over religion, but over power and territory. Despite this, it did confirm Oswy's Christianity and as a tribute he went on to create a number of monasteries, of which Whitby is by far the most famous. Also, the resulting christianisation if Mercia (either voluntarily or by force) was the end of any credible pagan force in Anglo-Saxon England.

9 years later, the Benedictean monastery at Whitby held the Synod. This marks the point where the differences between the Celtic Church of Columba, and the Catholic Church of Rome were settled - with the Catholic Church prevailing. Elfeda (daughter of Oswy, who eventually succeeded Hilda as Abbess of Whitby) was instrumental in the negotiation of this settlement.

According to the Catholic Encyclopedia, the Battle is also responsible for St. Hereswitha becoming a nun. St. Hereswitha was the sister of St. Hilda, and became a nun at the Abbey of Chelles when her husband was killed at Winwaed.

Return to the main Winwaed page.