Caliper have just released the 2016 version of their popular Maptitude GIS product. Maptitude 2016 adds a number significant changes, especially to the areas of route finding and territories.

Maptitude 2014 and 2015 had a relatively poor Route Manager. This was particularly noticeable to users who had moved from Microsoft’s discontinued Streets & Trips and MapPoint products. Caliper have taken notice of MapPoint’s routing abilities, and most of these can now be found in the new Route Manager.

When enabled, the new Routing Manager’s default position is beneath the Display Manager: 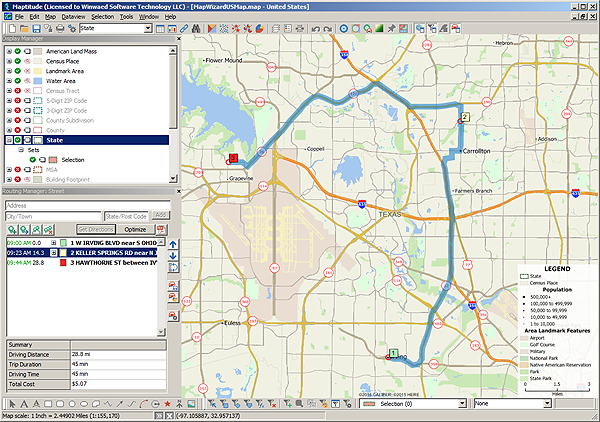 Maptitude with the Route Manager enabled and displaying a route.

With a closer look, we find it has much of the functionality of MapPoint’s Route Manager albeit in a more compact form: 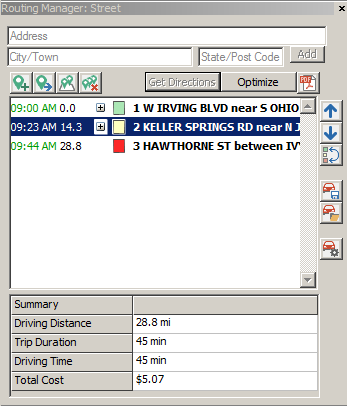 Waypoints (‘route stops’) can be entered individual by typing street addresses in the boxes at the top. Alternatively, you can use the buttons in the top left to point & click individual locations, or to add multiple waypoints from an existing selection set. Existing waypoints can also be moved or deleted.

The top three arrow buttons on the right, allow you to change the order of the waypoints. Routes can also be saved to a file and restored. The “Car and Gear” button displays the Route Options dialog box. This allows a range of options to be set, including Fastest/Shortest route, return route loops, etc.

The Driving Speeds tab allows for +/- adjustments of road speeds: 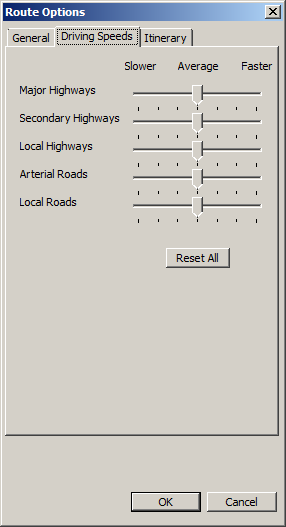 Unlike the very similar MapPoint sliders which were simply recommendations, the above sliders work by multiplying the individual road speeds to make them faster or slower. A typical Maptitude country pack has 20-30 road types, each with a range of different possible speeds. These multipliers are applied across all road segments within each broad category.

The Itinerary tab also provides a number of options that will be familiar to MapPoint users, including automatic rest times, and fuel consumption parameters: 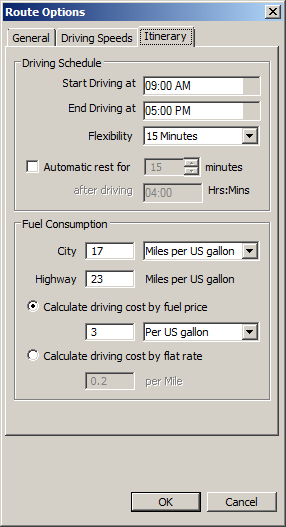 Maptitude 2016’s route finding is now much more efficient. This will be welcome news to the users of our batch route calculation products, MileCharter and MPMileage. I have not performed any detailed speed comparisons, but the calculation speed now appears to be close to one route per second for a typical country or large US state. Smaller areas (e.g. an individual city or small country) should be faster still.

Maptitude 2016’s street model has also been modified to support bidirectional road speeds. I.e. road segments are stored with speeds depending on the driving direction. This should be particularly useful for areas of old infrastructure where speed restrictions have been applied in one direction but not the other. Temporary speed restrictions due to road construction would also significantly benefit from this, if it was to be implemented at a future date.

We will be releasing new versions of MileCharter and MPMileage in the next 1-2 weeks with support for these bidirectional road speeds. These will be free upgrades for existing licensed users of these products.

Unfortunately most of the new Route Manager options have not been exposed in the API, however Drive Time Zones (“Network Bands”) are now supported in the API.

The new territory functionality also has many similarities to MapPoint’s territory support. For example, territories can be created out of collections of existing shapes (zipcodes, counties, etc). However, Maptitude 2016 adds support for the component shapes to be from any area layer (i.e. you could create your own custom territories or sub-territories).

Territories can also be created from point layers. Maptitude does this by creating areas of influence (a previously existing feature) around the input data points, and then uses these to create the new territory layer.

Here are a couple of examples from the documentation: 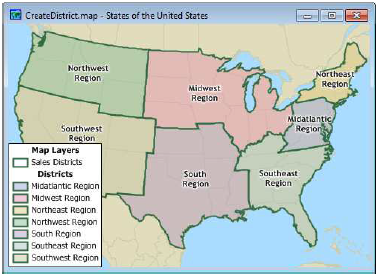 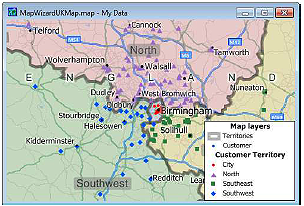 Maptitude pricing continues to start at US$695, including one free country pack. Existing users can upgrade at a significant discount. Click here to purchase Maptitude directly from Caliper.