In the second part of this article, I shall look at map datums and coordinate systems. In the first half, published on Monday, I looked at different projection systems.

As we saw in the first part, the map projection converts the curved surface of the Earth into a flat map. The datum is the model of the Earth which we measure positions against. The coordinate system is used to describe points on the Earth’s surface and/or on the final projected map.

Although we think of the Earth as being a sphere, in reality it is a complex shape with bumps and hollows. Cartographers model the shape of the Earth using a datum. All locations and heights are measured relative to this datum. A convenient global reference point is that of Mean Sea Level. For example, we measure altitude relative to sea level. In physics, the level of mean sea level is a surface of gravitational equipotential or geoid. Although the geoid is a lot smoother than the Earth’s surface, it is still very bumpy due to the effects of differences in mantle and crustal geology – eg. the geoid will show a noticeable dip over a subduction zone.

The geoid is still a complex shape that is difficult to use in cartography and surveying. Therefore the Earth is modelled with an oblate ellipsoid. An oblate ellipsoid is a slightly flattened sphereoid shape, like this: 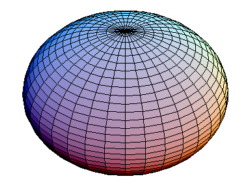 The flattening is small and is caused by the equator bulging slightly due to the Earth’s rotation.

The datum is formed by choosing a suitable ellipsoid and a reference point aligning the ellipsoid with the Earth. Here is an example showing how the datum approximates the Earth’s surface: 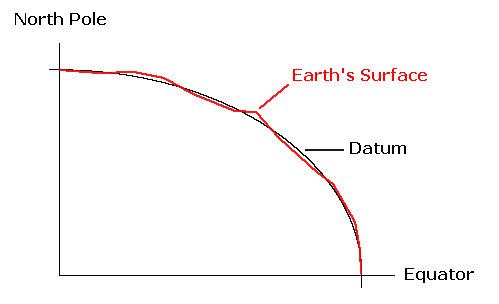 So why don’t all cartographers use the same datum for all maps? There are three main reasons for the wide variety of datums in use today. The most significant is that different ellipsoids are a better fit for different areas of the Earth’s globe. For example the OSGB36 datum using the Airy 1830 ellipsoid is an excellent fit for the UK, but it is a poor fit for North America. Similarly, WGS84 is a good “all round” fit for the entire globe, despite the existence of better localized fits.

Thirdly, the Earth’s surface is constantly changing. There are many reasons for this: plate tectonics, erosion, isostatic changes, and sea level changes are some of the most important. These effects are very small, but result in minor datum changes. For example WGS84 has already been modified once since 1984 and is due for another update in the next decade or so.

So what is the bottom line for datums in the world of web mapping? We must be aware of the datum being used. A location on the Earth’s surface will have different coordinates for different datums. Therefore we must make sure that all data points and layers use the same datum, or they are transformed so that do use the same datum.

Most online mapping systems use the WGS84 datum. This is a modern datum that is an excellent choice for global mapping applications, and is used by the GPS satellites. All GPS devices support WGS84, and most have it selected as default. Therefore, most mobile applications also use WGS84.

Finally, a coordinate system is used to refer to a specific point on the Earth and its corresponding point on the projected map.

Geographic Coordinates are sometimes mistakenly referred to as Geocentric Coordinates. Geocentric coordinates are actually three dimensional cartesian (x,y,z) coordinates with the centre of the Earth as an origin. These are rarely used to communicate information about the Earth’s surface, although they can be useful as an intermediate step for geometric calculations.

Many map projections are used with a two dimensional cartesian coordinate system. These measure the location’s position relative to an origin in projected two dimensional space. They can be very convenient for a country or state, but are impractical for a large area. A good example is the British Ordnance Survey’s National Grid. This uses the OSGB36 datum and a Transverse Mercator projection. Positions are measured in metres north and east of an origin just southwest of the Scilly Isles. The projection is actually centred on a meridian in the middle of the UK, but a “false easting” is applied which moves the origin to the far west and ensures all coordinates are positive.

A third coordinate system in common usage is that of Universal Transverse Mercator (UTM). This splits the globe into 60 zones according to longitude. Each “slice” has a width of six degrees. Each of these zones is projected using a Transverse Mercator projection and a cartesian coordinate system with an origin on the equator. To ensure positive ordinates, the northern and southern hemispheres have different sets of origins. This results in a total of 120 zones. Although the individual zone projections can be used in an overlapping manner, it is important to remember that distortion increases away from the zone’s central meridian.

UTM is only used from 80 degrees south to 84 degrees north. The Universal Polar Stereographic (UPS) coordinate system is used for the polar regions instead. These use a Stereographic projection – a conformal azimuthal projection.

As you can see,there are a variety of different map projections, datums, and coordinate systems available for use. Although some are old and outdated, most of the options have been created to solve particular problems or produce good maps of specific areas, and continue to be valid today.